Why I Always Work in a Dropbox Folder and Why You Should, Too!

“I accidentally saved over a file and I need to get the old version back…
HELP ME, PLEASE!”

I see it all too often in the User-to-User forums. A frantic cry for help from someone who saved over a file or deleted one by accident and was desperate to get it back. My answer is always the same, if you have no back up, you’re pretty much out of luck. This scenario is even sadder given how simple it is to avoid.

Unless you’ve been living under a rock, you’ve already heard of Dropbox. This is only my third post and the second one that involves using it. It’s that important a tool for me.

Before I go any further, I’m going to make a couple of assumptions:

If by some chance you’re not familiar with Dropbox, you can learn about it here.

Unfortunately too many Dropbox users only think of it as a file sharing service and therefore only save files there if they’re sharing them with someone else. And while Dropbox certainly is a wonderful way to share files with others, it’s also a great way to maintain version control and to restore lost files on solo projects.

By saving your files in a Dropbox folder, those files are automatically uploaded to Dropbox servers. From there you can access them from the web or from any other computer in which you’ve installed the Dropbox desktop app. While you’re working, Dropbox is syncing your desktop version and updating the version on the server to match. But what happens when you’ve made a few changes that you don’t want to keep, but you save anyway? Or even worse, you accidentally delete the file?

As I said, Dropbox is continually syncing your desktop files with its servers, but it’s also keeping a record of every version. So, if you need to go back in time and find a previous version, it’s very nice to know that you can. Here’s how:

The first thing you need to be aware of is that this a web based procedure so log into your account at dropbox.com and find the file in question. Right click and choose previous versions. 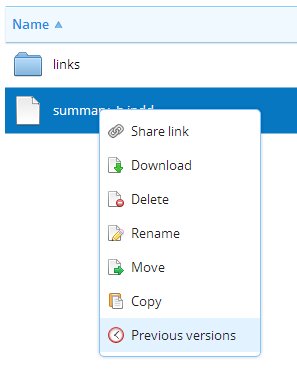 Right clicking your file in the Dropbox web interface gives you the option to reveal previous versions.

When you click Previous versions you’ll be presented with a 30 day history of the file: 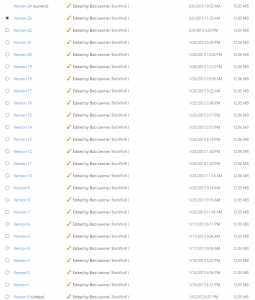 Every version for the last 30 days is available.

Choose the version you’d like to use and click the Restore button. Depending upon the speed of your internet connection and the size of the file, every synced device will be updated to that version within seconds. Unfortunately there’s no preview function so you may have to do this more than once to zero in on the right version.

But what if you’ve deleted the file all together? No need to panic. Again, in the web interface, browse to the folder that held the file and click the Show Deleted Files button.

One click and any deleted files can be restored.

Once you’ve un-deleted the file, all of the previous versions will also be available and the most current version should show up in your desktop folder in a matter of seconds. In either scenario you’ll be back to work without missing a beat.

The free version of Dropbox gives you two gigabytes of storage space. If you sign up through a referral link you’ll get an extra 500 megabytes and Dropbox will give you more space if you refer your friends. But if you’re like me, even that won’t be enough. You can get 100 gigabytes of storage for $99/year which I happily pay.

With so many choices in free and paid file sharing applications, there’s no excuse to not to use them. They’re free or very inexpensive insurance.

If you work on projects long term you may be interested in Dropbox’s Pack Rat feature which will allow you to restore files in perpetuity for an additional $39.99/year. Personally, I’ve passed on that option but I can see where it might come in useful.

There are other services as well, such as Box (formerly Box.net), Microsoft SkyDrive, and Google Drive. They all offer desktop syncing and version control and they also have free versions (version control in Box is only available for paid accounts). All are worth checking out.

You may find it worthwhile to sign up for all them just to have enough free space to work on projects without fear of losing an awful lot of work.

Set it and Forget it 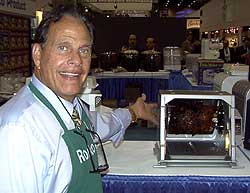 Rotisseries aren’t the only thing you can set and forget. Once you save your files in a Dropbox folder, you can forget all about the headaches that come with losing files.

Dropbox and other file sharing services can be a lifesaver not only if you’ve messed something up but if a file you’re working on has become corrupt or unstable.

Having a recent version at your finger tips is a good way to sleep better at night. And the real beauty of this is that you don’t need to do anything different once you’ve chosen a Dropbox folder as the location for your files.

But remember, nothing I’ve discussed here will work if you don’t use it. Please get into the habit of creating a folder for projects in your Dropbox folder instead of your Documents folder. I’m sure, like me, at some point you’ll be happy you did.